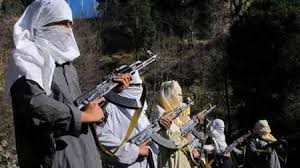 Ahead of Prime Minister Narendra Modi’s visit to the Valley on November 7, the police and other security agencies are on a high alert as pictures of fresh Lashkar-e-Toiba recruits are doing the rounds on social media.

Police sources say the young men, believed to have infiltrated from across the border a month ago, were ferried to south Kashmir by slain LeT commander Abu Qasim, days before his death.

Qasim was killed in Khandipora village of Kulgam district on October 29.

The highly trained militants are believed to be in their late teens or early twenties.

“The information regarding infiltration and subsequent ferrying of these militants to south Kashmir had been with the police all along,” said a senior police officer from Pulwama district.

While the police is still groping in the dark, the pictures are being circulated on social media sites, including Facebook and WhatsApp.

“Pictures of at least nine armed men, clicked in the woods, are doing the rounds,” the police officer said.

Apart from ascertaining the veracity of the pictures, the police have stepped up the hunt to nab them, he added.

The police do not know the names of these highly trained, young, foreign men. Sources in the police said the militants had been distributed across south Kashmir in smaller modules.

The addition of the nine fresh recruits has strengthened the Lashkar in south Kashmir from three surviving foreign members to 12.

“The killing of Qasim was a major setback to the Lashkar in south Kashmir. However, addition of nine new faces will be a fresh challenge to security establishment,” said the police officer.

Meanwhile, the police and other security agencies have gone into an overdrive to hunt down the militants ahead of the PM’s visit.

“The pictures have been doing the rounds for quite a while now. We are verifying the veracity of these pictures.” said the IGP. “The police are not yet sure whether Qasim was the man behind smuggling these militants to south Kashmir or this was an older module that it is thought to be,” he added.