India may be going digital, but high-speed internet on mobile phones still remains a challenge, even on 4G. Despite telecom companies announcing massive rollout of 4G services, the average network speed in India remains the slowest across countries+ having substantial telecom networks, lagging even Pakistan, Algeria, Kazakhstan and Tunisia.

According to a list prepared by mobile analytics company OpenSignal, 4G download speed in India is the slowest across 88 countries spanning six continents. This is despite the fact that 4G has been expanding at a rapid pace across the country, and networks are being upgraded from slower 2G services.

On an average, the 4G speed in India has been measured at 6 mbps (actual experience could be much lower), whereas subscribers in neighbouring Pakistan enjoy internet at a more than double speed of 14 mbps. Algeria is ranked second-last at 9 mbps. 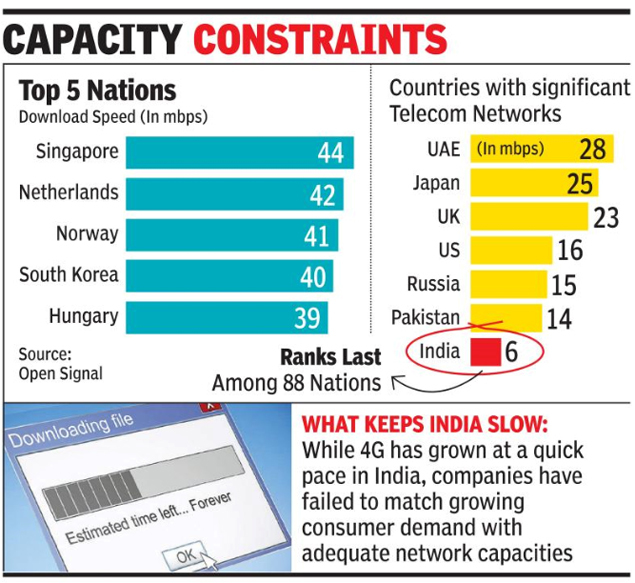 According to OpenSignal, subscribers in Singapore get the fastest downloads on 4G at 44 mbps, followed by the Netherlands at 42 mbps. In Norway, the 4G download speed is 41 mbps, while South Korea gets 40 mbps. OpenSignal analysed more than 5,000 crore measurements (collected between October 1 and December 29 of 2017) of speed from over 38 lakh smartphone and tablet users across six continents.

Giving out reasons for a slower network speed in India despite a wider 4G reach, the study blamed capacity constraints on network. Though 4G is available for around 86% of the time people access the internet, “4G networks lack the capacity to deliver connection speed much faster than 3G”, it said.

The telecom industry in India is staring at a financial nightmare, with most of the companies either deep in the red or just managing to stay profitable. The onslaught of fierce competition from 4G-only Reliance Jio saw Vodafone and Idea Cellular slip into losses, while Airtel saw profits shrink massively.

Companies that provide network infrastructure to mobile companies said in private that most of the operators are slow in making fresh investments for augmenting capacities. “The sector is in a financial mess. We have seen slippage in investments, which are drying up due to losses,” one of the top infrastructure providers said, requesting anonymity.

While Jio has launched pan-India 4G services, others were literally forced to follow suit. Airtel is also giving 4G on a pan-India basis, while Idea Cellular covers the country, except Delhi and Kolkata. Vodafone is currently giving the service in 17 circles.

Subscribers complain that they “do not get promised 4G download speeds”, although companies make tall promises. “Internet is often very slow, and buffers on many instances,” a customer of a top telecom company said.

Concerns over poor service and slower speed have also been raised by the government, as it has started offering a variety of services online and is pushing digital payments in a big way.

Telecom secretary Aruna Sundararajan has said the government is mindful of the slow internet speed experienced by internet users in many parts of the country.