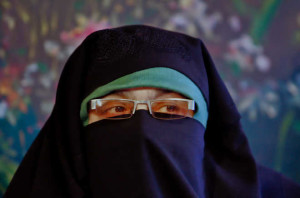 Andrabi said she never met the three youths, who had planned to travel to Srinagar and later join the Islamic State. “Someone has been arrested and he has said that he had to visit me, where is my role in all this… I have no role in it. They have not said Asiya Andrabi invited us,” she told .
She said there was “no truth” in the allegation that she was involved in the plot to send the arrested youths to join the Islamic State. “I have to liberate Kashmir, what do I have to do with the IS,” she said.
The three Hyderabad youths – Abdul Waseem, Umar Hasan and Maaz Hasan – were arrested at Nagpur airport last week when they were allegedly planning to leave the country to join the IS. The trio had booked a flight from Nagpur to Srinagar.
The three youths have reportedly told investigators that they had planned to meet Andrabi in Srinagar and seek her help to join the militant group which operates in Syria and Iraq.
The trio is related to Syed Salahuddin, former president of the Student Islamic Movement of India (SIMI) who died last year.
Andrabi said she had visited Hyderabad in October last year after Salahuddin’s death in a road accident. “I went to Hyderabad to console his seven sisters and aged mother. There was a good arrangement of segregation at their home and I did not see a single male. There might have been children of these sisters, but I did not see them,” she said.
Andrabi said she knew Salahuddin and his seven sisters, who were also associated with SIMI, since 1997 when she was invited to a conference organised by SIMI.
Inspector General of Police for Kashmir zone SJM Gilani said the Telangana police, which had registered a case against the three youth, had not approached the state police here for any assistance. “We are not doing any investigation. Unless we have a case, we don’t investigate,” he said.