The cases of domestic violence are becoming alarming in Kashmir as a woman succumbed to her burn injuries at a Srinagar hospital today taking the toll of self-immolation by woman to three from May this year. 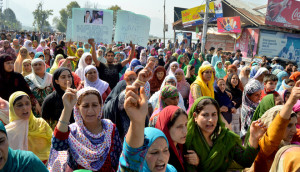 A 34-year-old, mother of two, set herself ablaze at the Old City Srinagar on Friday after “harassment” by her in-laws. After the neighbors found the woman in a critical condition, they took her to the hospital where she died today. She had received 90 per cent burn injuries.

“The woman was rushed to hospital by the locals on Friday evening after she set herself on fire. We have eye witnesses whom the victim has told that she was harassed by her in-laws. This is the clear case of domestic violence,” said Station House Officer (SHO), Khanyar Police Station, Rafiq Ahmad.

The incident took place on the evening of Eid-ul-Azha in Kashmir at Kaw Mohallah, Khanyar. “According to eye-witnesses, the victim’s in-laws threatened her regularly,” the official said.

The family of the victim who lives in Ishber Nishat also blamed her in-laws for her death.“They used to harass her every day for dowry. On Friday afternoon, she called us and told us to visit her as her in-laws, including her husband, threatened to kill her. But by the time we reached there, the incident had taken place,” said Mushtaq Ahmad, victim’s relative. The deceased is survived by two daughters. During the initial investigation, the police have arrested the husband of the deceased, two sisters-in-law and mother-in-law. “A case under Section 306, 309 and 498-A has been registered against the accused and investigations are on,” the official added.

Meanwhile, family members and relatives of the deceased joined by the residetns of Ishber, Nishat, took out a protest rally at the Press Colony and Nishat this evening demanding strict punishment for her in-laws.

“Most of the cases are due to violence by the in-laws over dowry,” said SHO of women police station, Gulshan Akhter.

”The situation here is grim as everyday nearly six cases are registered,” said Nayeema Mehjoor, chairperson, state women’s commission. During 2014, the commission registered 1,900 cases of marital discord. In 2013, seven incidents of dowry deaths were reported in the state.

The number of incidents of assault on a woman by husband stood at 469 in 2014. The number of incidents since then has seen an increase. In May 2015, three women were admitted with burn injuries at the Shri Maharaja Hari Singh (SMHS) hospital in a single day who tried to end their lives after facing harassment by their in-laws. Two victims later succumbed to their burn injuries raising a concern over the alarming rate of domestic violence.