Jammu and Kashmir Chief Minister Mufti Mohammad Sayeed said that “certain complications” were expected while forming alliance with BJP in the state and assured that the coalition government would complete its full term as it is focused on “governance”. 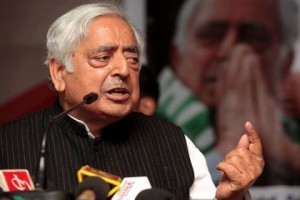 Sayeed was speaking at a PDP meeting at his residence late last night, where ministers and legislators belonging to his party and senior party leaders, discussed the situation in the state.

“It was a routine meeting called before the start of the Assembly session. I would call it a pre-session get-together,” PDP chief spokesman Mehboob Beg told PTI.

Beg said the overall situation in the state was discussed in the meeting, where the party patron said the coalition would last its full term of six years.

“He (Sayeed) looked quite confident to carry on. He said there will be no problems,” Beg said.

The PDP chief spokesman quoted the chief minister having said that in a coalition, there would be certain complications but focus has to be on governance.

“Sayeed said the coalition is a necessity and the alliance with the BJP was to respect the mandate that the elections threw up. He said it was expected and we knew at the time of forming the alliance that there will be certain complications as it was an alliance between north pole and south pole, but our focus should be on the governance,” he said.

Asked if the controversy over beef ban was discussed, he said though there was no specific discussion on the issue, Sayeed said that “such issues would not shake us”.

“The chief minister said some issues would be there but such issues won’t shake us. He also said PDP will not compromise on its basic principles,” the PDP leader said.

He said PDP president Mehbooba Mufti, who is currently in Saudi Arabia as part of Haj delegation, will preside a separate meeting of party legislators to chalk out a strategy for the upcoming Assembly session scheduled to begin on October 3.

The chief minister also hosted a dinner for all those who attended the meeting.