The ongoing annual Hindu pilgrimage Amarnath Yatra in Jammu and Kashmir was suspended for the second day on Sunday after the Jammu-Srinagar national highway was closed due to heavy rainfall. 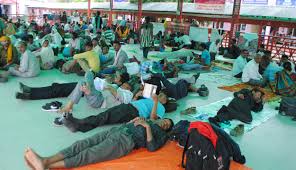 Heavy rains throughout the night triggered landslides at Kheri in Udhampur district and also at some places in the Ramban district, forcing authorities to close the highway, a police officer told IANS.

“No pilgrim was allowed to proceed from Jammu to the valley,” he said.

A decision on resuming the Amarnath Yatra will be taken only after the highway is opened. Heavy rainfall had forced authorities to close the highway on Saturday as well.